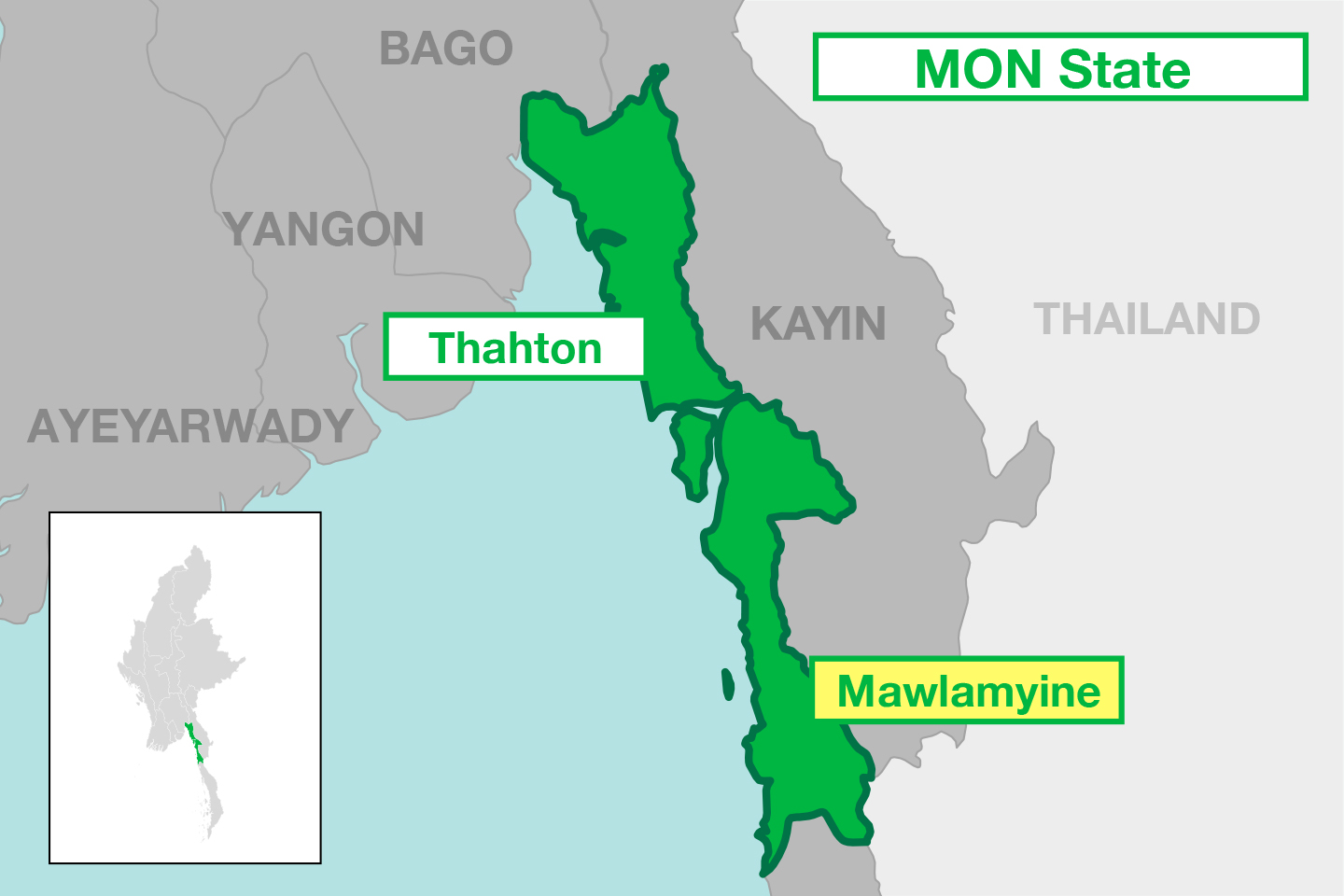 Mon State is bordered by Bago region to the North, Kayin State to the East, Tanintharyi Region to the South, the Andaman Sea to the West and sharing a short border with Thailand. The capital city of the Mon State is Mawlamyine. Mon state belong the islands, hills, forests and many beautiful sea resorts. It is famous for its historical pagodas such as Kyaiktiyo Pagoda (also known as Golden Rock), Kyeik Than Lan pagoda, Kyaik Kha Mi pagoda, Kyaik Htee Saung pagoda, Shwe Sar Yan pagoda, Kyaik Ma Raw pagoda and Win Sein Taw Ya Reclining Buddha. 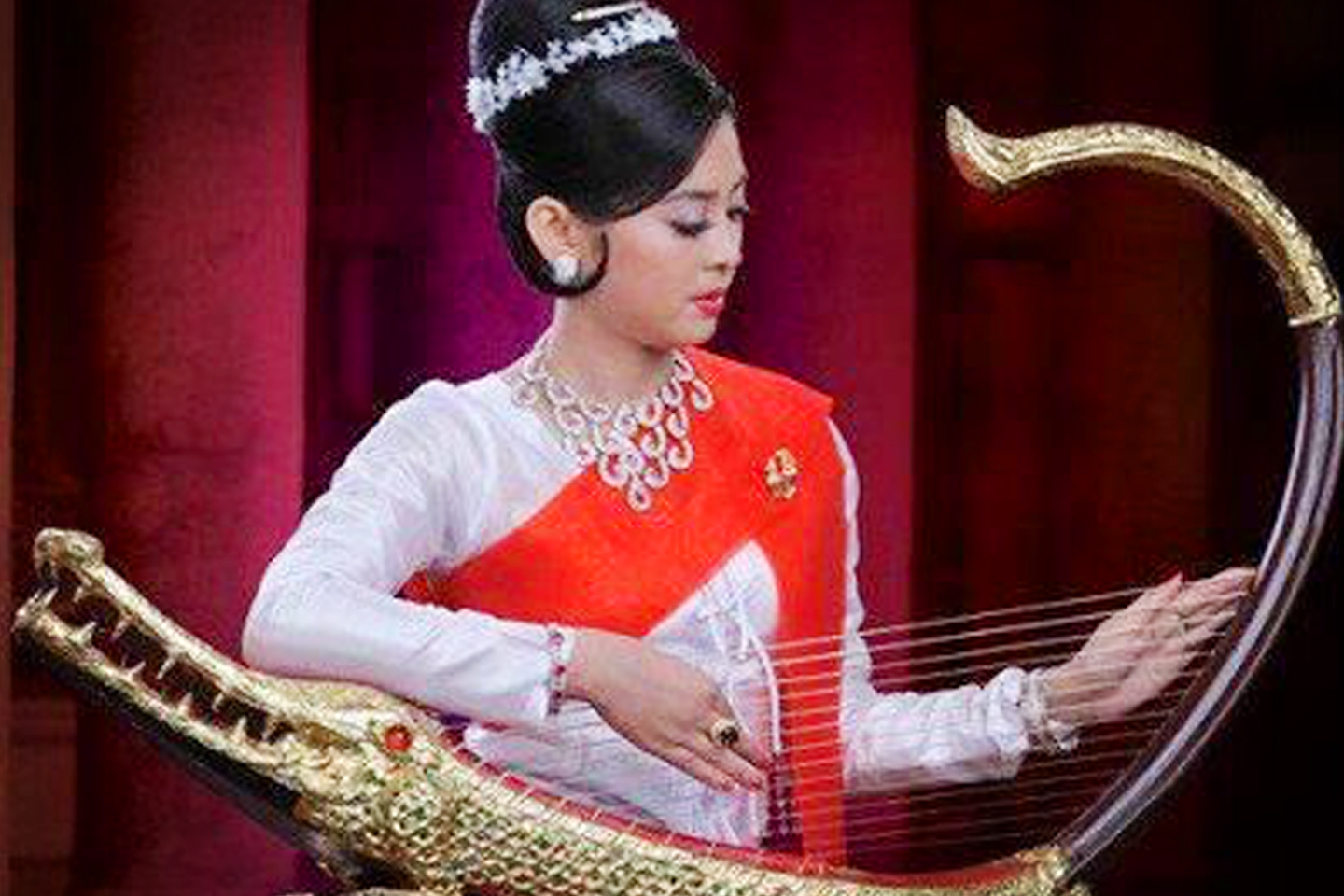 The majority of the inhabitants are Mon. Besides of Mon, Myanmar, Kayin, Pa-O, Chin, Kachin, Rakhine, Shan, Anglo-Burmese and Burmese-Thai are residing in the Mon State. Mon has its own literature and culture. They speak their own language and some couldn’t even understand & speak Myanmar. The majority religions of the people are Buddhists but there also have Christians, Muslims and Hindus in the Mon State. 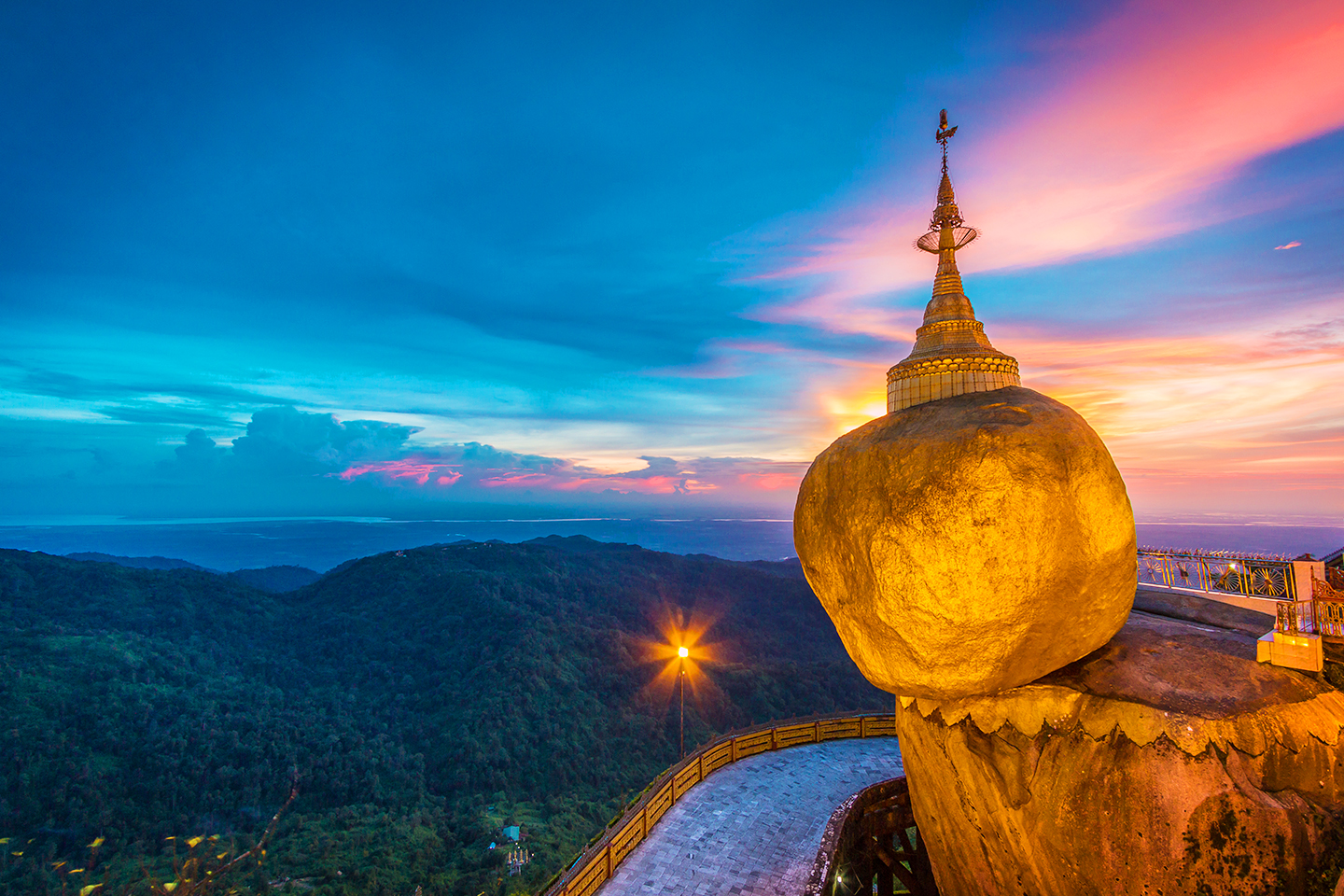 Kyaiktiyo Pagoda is situated 3609 feet (1100 meter) above the sea level. It is located in the Kyaiktiyo Township and which is one of the popular pilgrimage sites and major tourist destinations in Myanmar. It is well known because of its special structure. The giant granite boulder is balancing perfectly on the edge of the sloping surface of the rock while the contact area is extremely small between them. The peak season of the pagoda is from November to March. https://mingalago.com/interest/kyaikhtiyo-pagoda/ 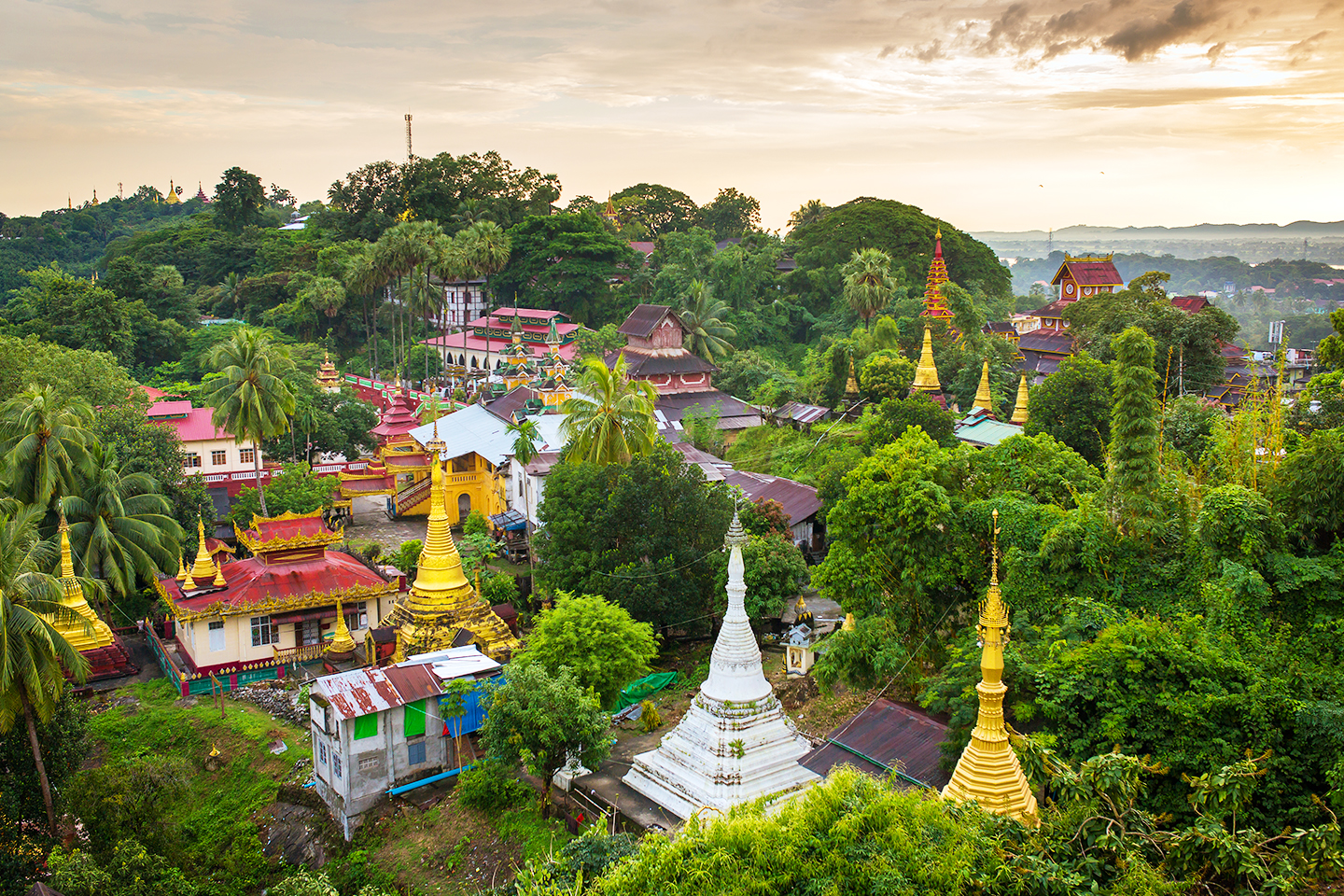 This pagoda is the one of the historical pagodas in Myanmar and which is situated in Mawlamyine. A hair relic of the Buddha, Tripitaka manuscripts and the gold images of the Buddha was enshrined in the pagoda in 875 A.D. The original height of the pagoda was 56 feet (17 meter) but the successive kings raised the pagoda’s height until it reached to the present height of 151 feet (46 meter). 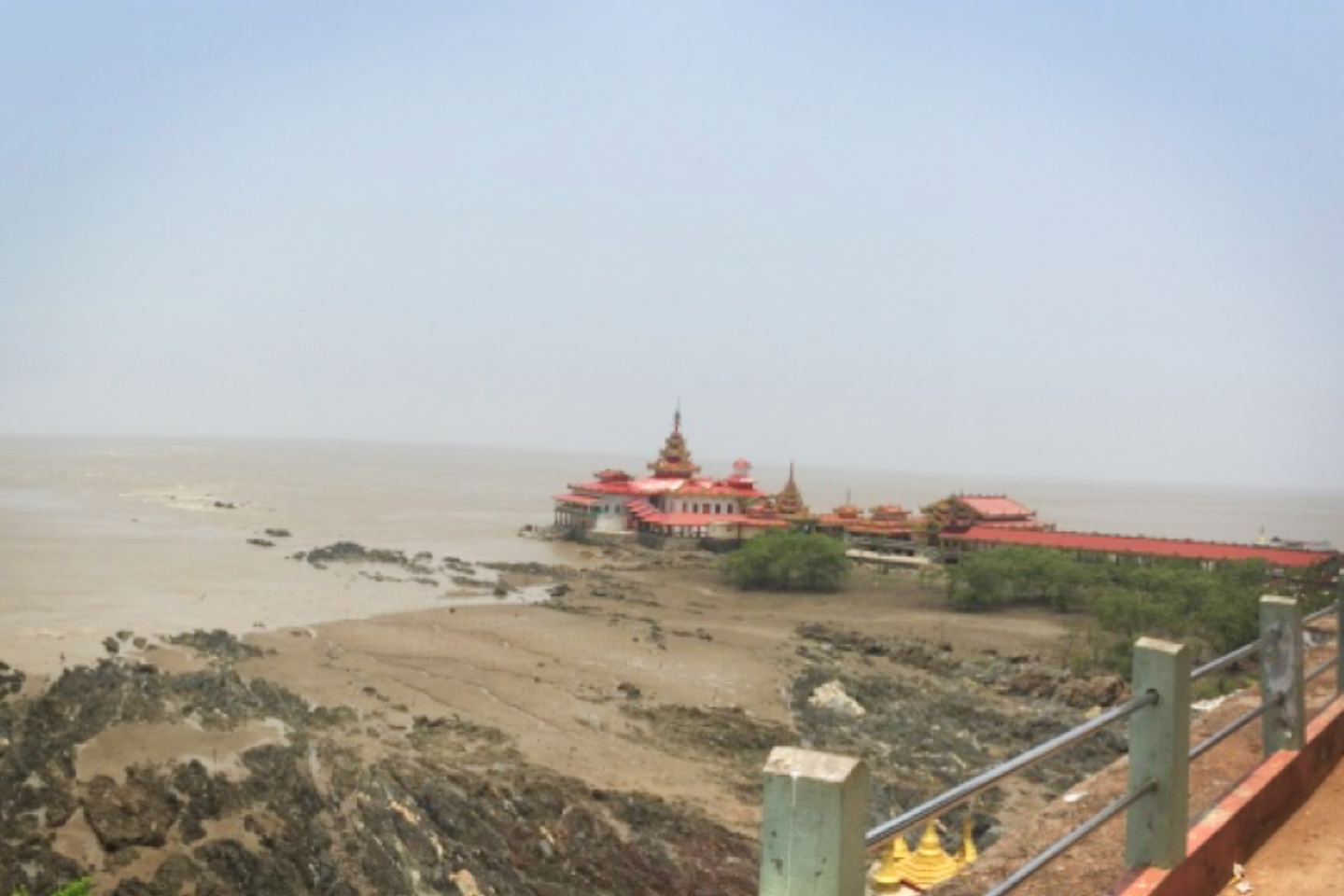 In Burmese it is called Kyaik Ka Mi Yay-Le Paya and which is situated on the sea and connected with the corridor to the sea shore. It is located at the Thanbyuzayat city and one of the major tourist attractions of Mon State. The basement of the pagoda is not engulfed even during the highest tide. The opening hours are from 7 am to 8 pm daily. 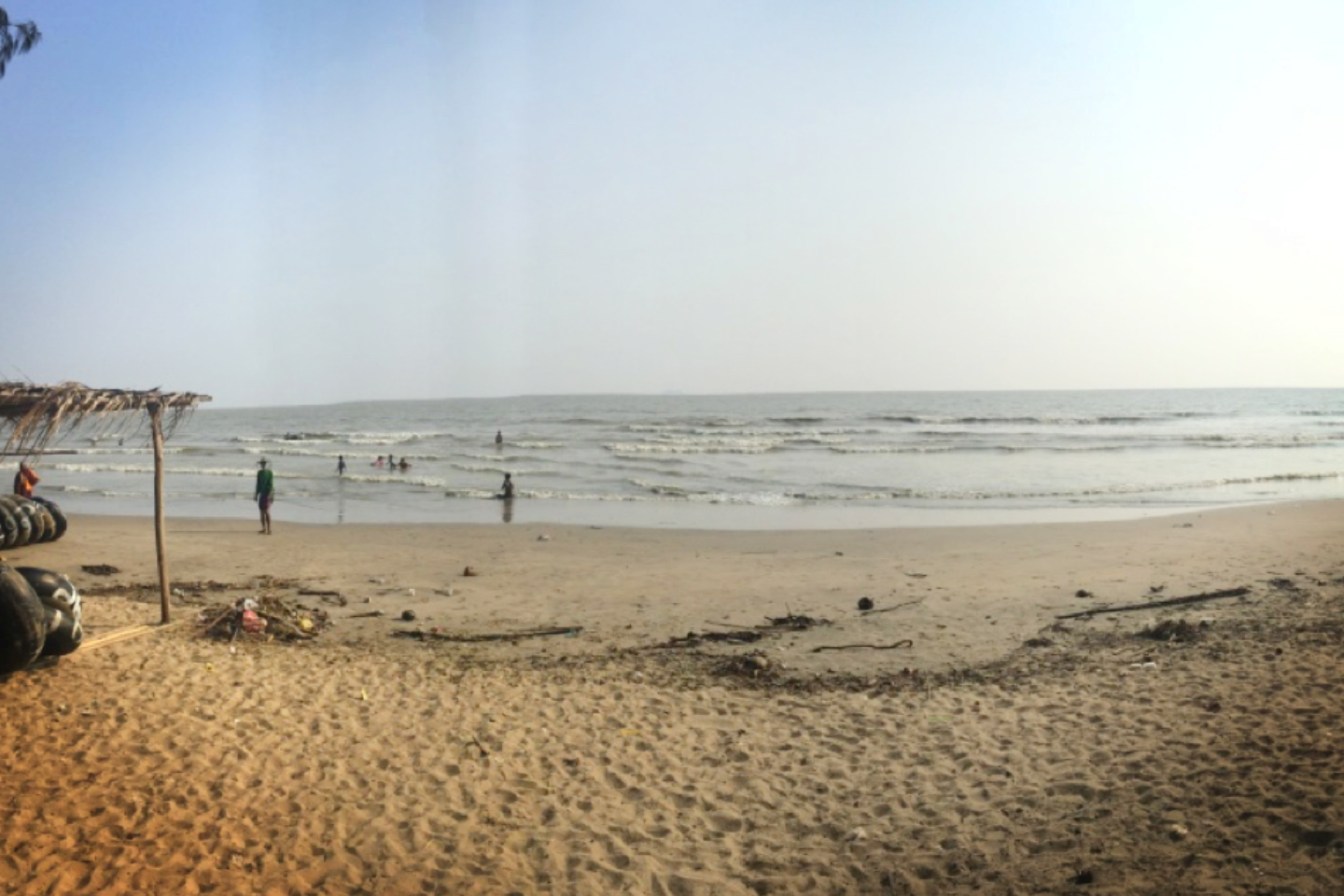 Set Se beach lies on the 24 km south of the Kyaik Kha Mi pagoda and 16 km south-west of Thanbyuzayut city. It is the most popular beach of the Mon State. This beach is very wide and visitors from all over the country comes visit to this brown sand beach. There only has few foreign visitors since it still doesn’t have many facilities to attract the foreign travelers. Don’t forget to drink fresh coconut juice sold by the vendors which is so sweet. 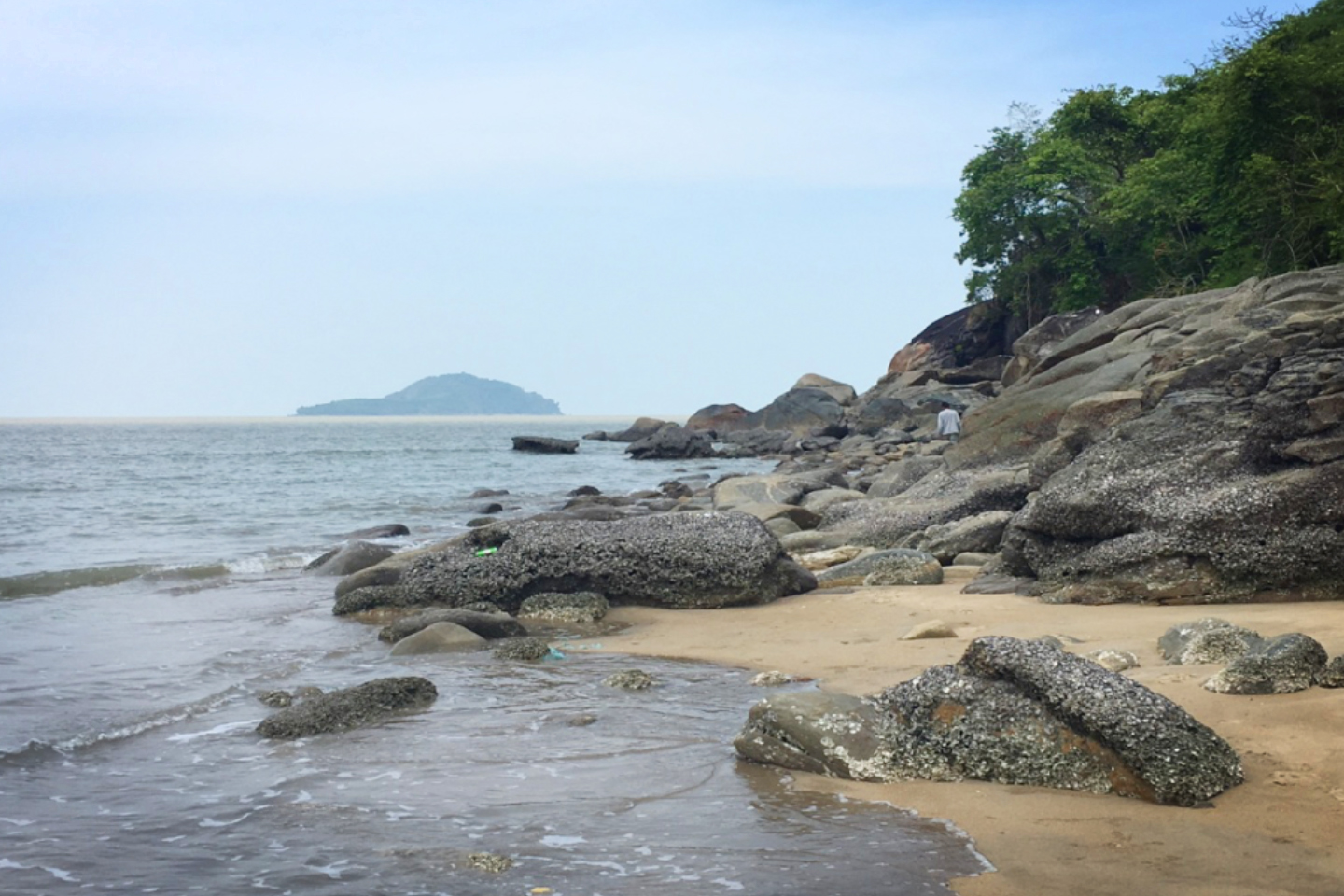 This beautiful beach is 25 km from Ye and it becomes popular hot spot in these days. It is the untouched beach and there still have no hotels and guesthouses to sleep over. But, restaurants are opened and we can eat seafood with fair prices. There still have no public transport and we have to get there by car. 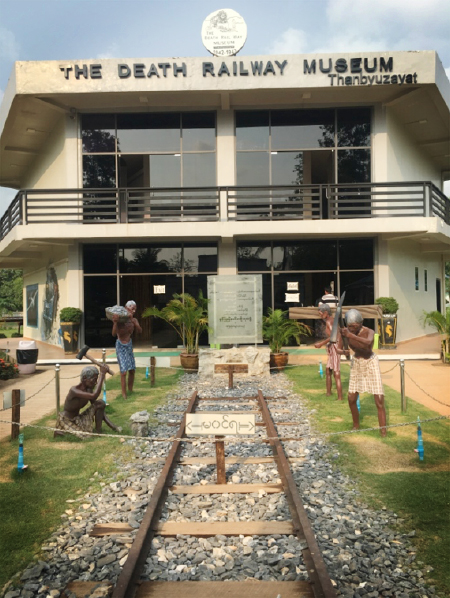 The museum is situated in the town of Thanbyuzayat. It is well known as the Death Railway due to many people died during construction. The estimated people died were around 100,000 including Australian, Dutch, British, American and labors from Myanmar, Thailand & Malaysia. The railway is 415 km long and constructed during Japanese occupation in World War II.

Capital of the Mon State, Mawlamyine 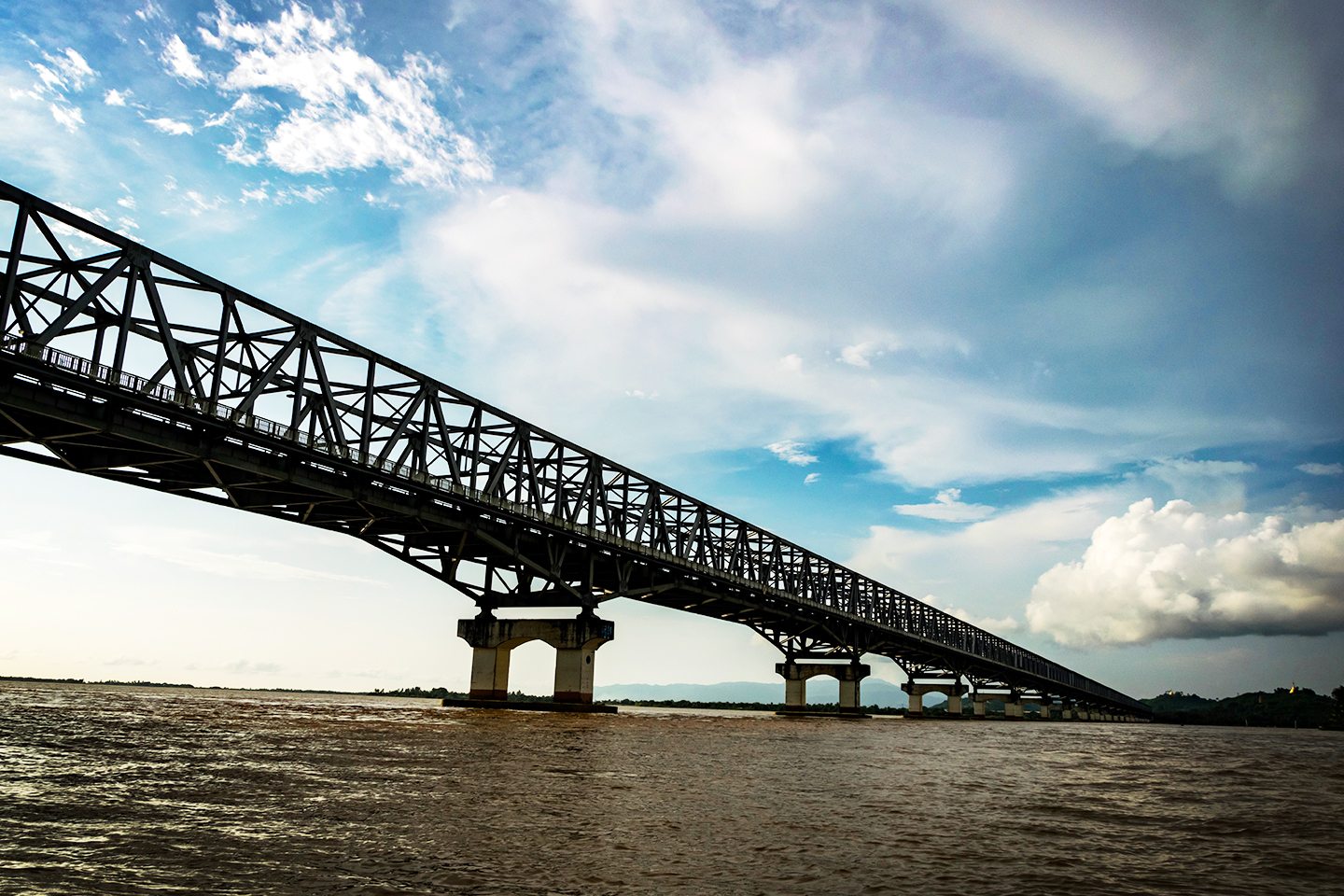 Mawlamyine is the capital of the Mon State. It is the largest city and the main trading center. It lies on the South East of Yangon and the fourth largest city of Myanmar. Mawlamyine is also known as the educational city for the South Eastern region. It has 13 public high schools, 2 institutes, 1 college and 1 university. It is also famous for its tropical foods and many historical pagodas.

How to get to Mawlamyine

Traveling by train is also popular among visitors. It can enjoy the breathtaking views along the way but it takes few more hours to get to there. The railway starts from Yangon and heads to Mawlamyine, Ye and Dawei.

You can go there by car from Yangon - Mawlamyine highway route, Mawlamyine - Kawkareik - Myawaddy - Mae Sot route and the three pagodas route from Thanbyuzayat. These are the most common way among visitors. There are highway buses from Yangon, Mawlamyine to Hpa An, Myawaddy and other towns.

Water transport is using not only for traveling but also for the international shipping to many places. Mawlamyine is exporting goods to worldwide and it is the main port for South East Asian region. 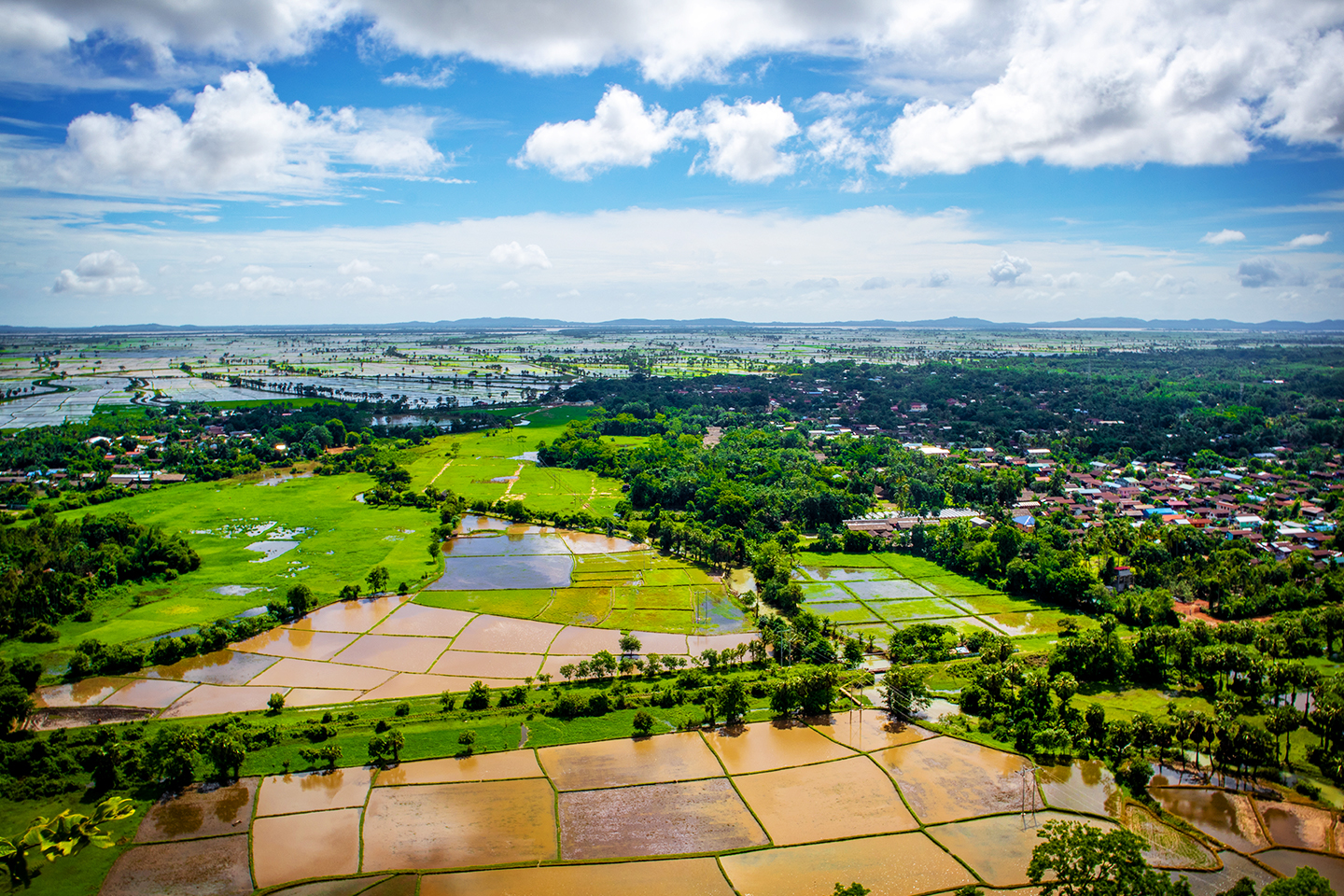 Generally there only has two types of seasons in Mon State: the dry season and the wet season. It is uncomfortable to travel from June to September because it is sometimes very hot and sometimes raining heavily during these months.

Other famous towns of Mon State 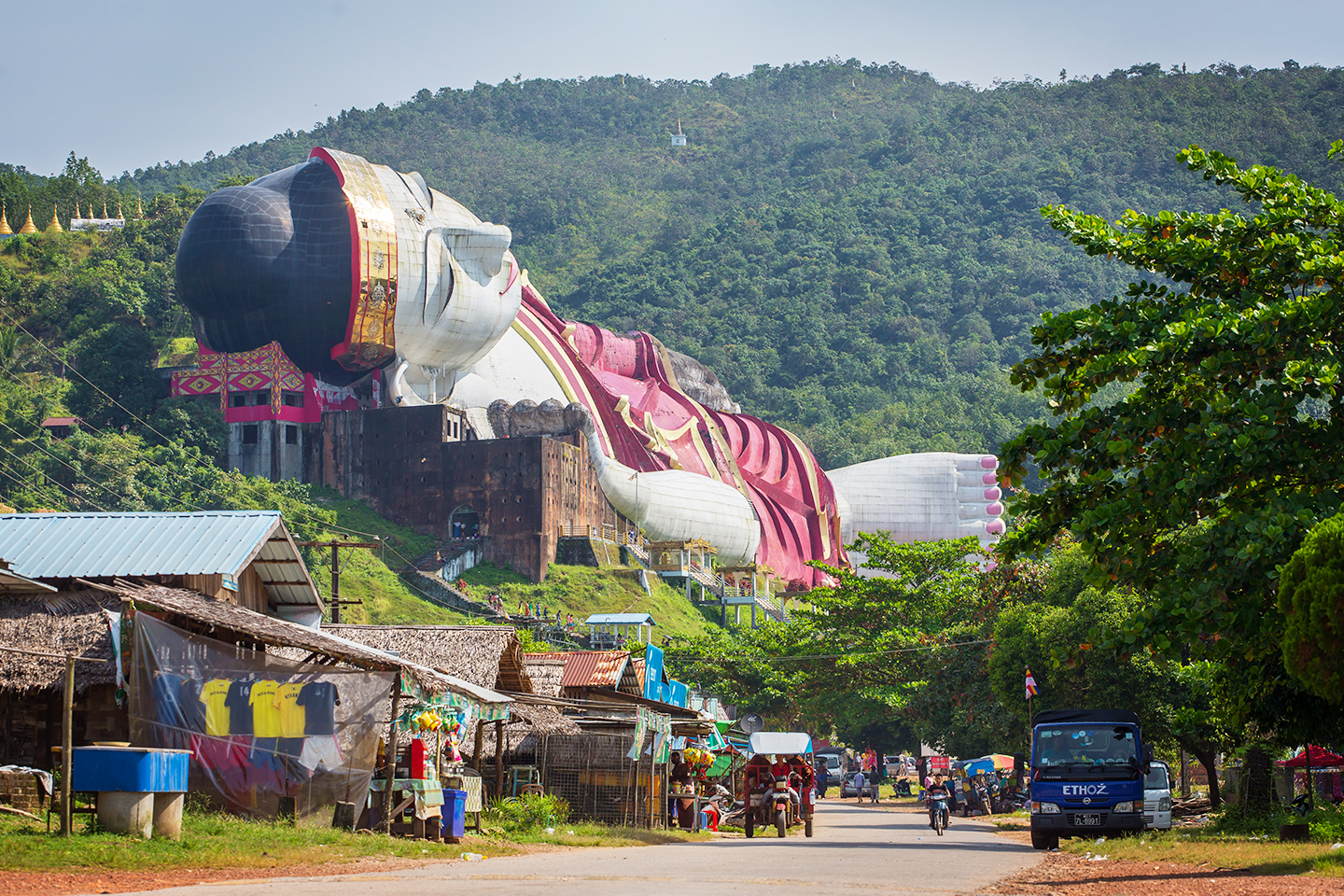 Mudon is well known for its cotton weaving. It is 29 km away from Mawlamyine. This town is peaceful and has famous Win Sein Taw Ya Reclining Buddha which is 180 m in length and 34 m in height. Inside of this Buddha image is filled with many rooms that show the teaching of Buddha. You can get there by Maw La Myaing - Mudon road.

It is the famous picnic spot for locals. Many visitors come to swim and eat gourd fritter. At the northern part of the lake, Kangyi Pagoda was built to enshrine the Buddha’s hair relic. There is a large compound around the pagoda. 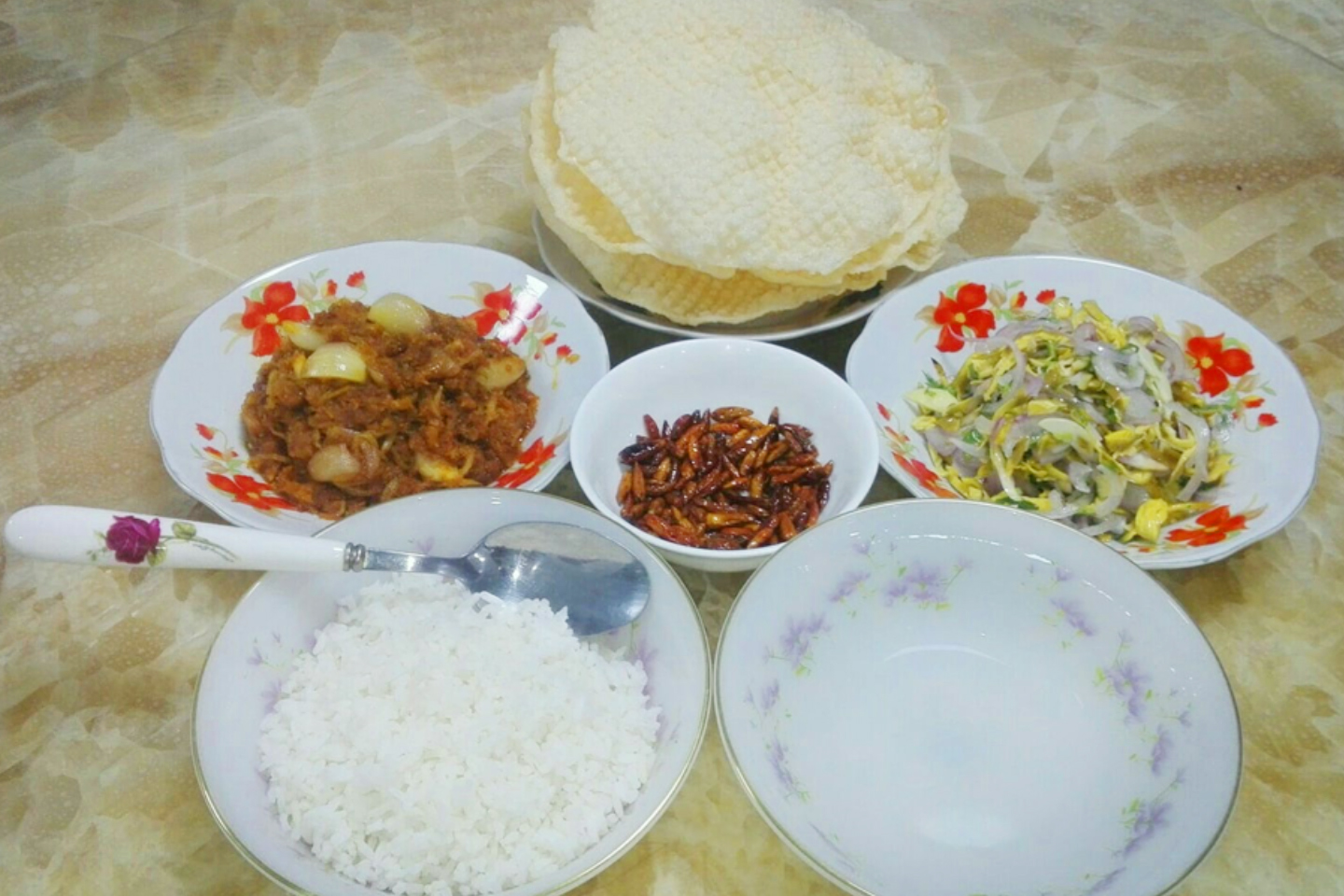 Thingyan Rice (known as Thingyan Hta-Min in Burmese) is the traditional Mon dish and the most popular dish of the Mon State. It is a bit tricky to cook. The rice is infused with wax extracted from burning candle and eats together with the fried salted fish and mango salad. The salted fish is fried with onions and sour mangos. Although it is popular as a Thingyan traditional food, the people from Mon State eat not only as a breakfast but also as a snack/light food at any time.